I am a bit of a wanna be homesteader. I dream of living in the middle of nowhere living a self-sustainable life. Making everything from scratch, living off of the food I grow and raising chickens for eggs, a cow for milk, butter, yogurt and cheese, dogs for protection and sheep with gorgeous wool to spin and knit into socks, sweaters, scarves and gloves.

I would want my homestead in a place where I could forage for foods that grow locally to add to my supplies and where it snowed in the winter and stayed nice in the summers...not that I don't appreciate the 113 degree days that we have in Arizona...

Anyway, one of the things that led me to making soap in the first place is that homesteading-make-it-from-scratch dream and I have wanted to do that as old school as I could. People back in the day rendered their own fats to make soap. Some even made their own lye with wood ash. I didn't go that old school, the process is very interesting but it may not be as consistent as the store bought lye.

I also didn't render my own fats, though that is something I may try in the future. I like the idea of not wasting anything, so saving fat from foods to turn into soap seems like a good thing. It's not something I would list in the shop but I wouldn't have a problem using it or giving it to family members.

The "Almost Old Fashioned Lard Soap" I put together is from Armour Premium Natural Lard I purchased off of Amazon, I couldn't find any locally that didn't have BHA (butylated hydroxyanisole) and BHT (butylated hydroxytoluene) added for preservatives. At least it wasn't anywhere on the label, not sure what the regulations are on those ingredients. I do hope to find a more reasonably priced natural lard for future batches.

When opening the lard I wasn't sure what to expect, I've only used it once before, for baking pie crusts. And of course, being human one of the first things we do with such things is we smell it. It's really hard to describe the scent of "raw" lard but it was closest to that time when you decide to deep fry foods and the oil smells like oil. Mhmm. That's the scent of a container of lard.

Not a bad smell but was it something that would carry over in the finished soap? Lard makes very hard, white bars of soap, and it's moisturizing. From what I've read, it is also a very fast moving soap so it comes to trace fairly quickly. I superfatted the recipe at a higher percentage because hard bars can handle extra fats that aren't being saponified by the lye. The extra fats makes the bars more moisturizing.

Soaping at around 80 degrees F, I get my ingredients together and start blending with my stick blender (that's why this is Almost Old Fashioned Lard Soap, they didn't use stick blenders back in the day). The only ingredients in this soap is lard, water and lye...and I'm expecting a white bar of soap...


The batter did come to trace very quickly but the soap was a very lovely orange when poured into the mold. Not quite as white as I was expecting. But over time it mellowed out a bit. 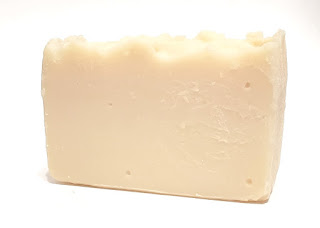 And the finished bar. It isn't pure white, I'm okay with that, it's soap. After letting it cure for four weeks I gave it a try. First let me start by saying that it does NOT have the deep fried oil smell any longer. It just smells like an unscented bar of soap. It's quite nice, really. And it did make a hard bar of soap. When using, it's very silky feeling and it has a creamy, but not bubbly, lather. It just feels pretty amazing!

I only have three one bars in my shop. I hope my ancestors who made their own soap would have approved.
at August 22, 2019 No comments: