My daughter's beau asked if I could make a Viking soap series and I thought it was kind of a cool idea!  Between Matt, my daughter Loren and myself, we came up with three soaps.
We discussed scents mainly but their ideas started my brain moving into ingredients that may have been available to Vikings, or in some cases because they sound like they'd fit the soap.
One of the scents Matt suggested was Sandalwood but it can be a bit pricey. He also suggested birch. I purchased birch and definitely love the scent but it reminded me of the Beechnut Gum we used to get back in the day. The scent is really pleasant and I will use it for soap but it wasn't meshing with the Viking theme for me.  I went ahead and splurged on Sandalwood essential oil and I'm so glad I did! I love it!
The first soap I made for this series is Viking Sea Salt Sunset Soap. This is a salt soap and I wouldn't recommend it to folks with sensitive skin, though I used fine salt it is still exfoliating. (UPDATE: I've been using this soap for about a week and have not noticed anything but a very light exfoliating feel on occasion. It's not harsh at all!) Apparently salt soaps are often used in spas, never been so I wouldn't know from personal experience. 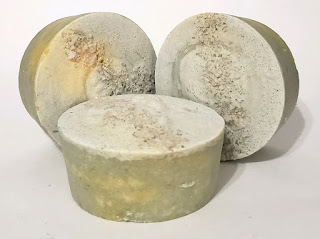 The Viking Sea Salt Sunset Soap has Baikal clay that gives it a lovely blue-green color. It's from Russia and is used for a gentle exfoliant, detox, and some use it as an anti-aging mask. I can't make claims that it will make you wrinkle free, but it's pretty.
The soap has Australian sea salt, oils, shea butter and a high percentage of coconut oil. Normally I try to keep the percentage of coconut oil under 25% in my soaps because it's so cleansing it has a tendency to clean the oils right off your skin and makes your skin feel dry. But, salt has a tendency to remove any lather/bubbly properties from soap and coconut oil makes for lots of bubbly, creamy lather. To keep the soap from making your skin feel dry the soap has 20% superfats, well above the 7-9% normal superfats. Another point, salt soaps are moisturizing and hydrating.  Weird, huh? I honestly though it would be drying.
I also added sea buckthorn oil to this soap...from Siberia...for the bit of orange sunset color in the soap. I have to say this oil has such a lovely scent and is a beautiful orange! I don't think the scent carried through the saponification process but the Sandalwood smells amazing. On top, I sprinkled a tiny bit of Birch smoked sea salt from Iceland (it smells amazing and the rest of the jar is going into the kitchen). The smoky scent has disappeared but it was definitely worth sprinkling it on the soap. It should wash off the first time the bar is used.
The next soap in this series was Viking Spiced Mead Soap. First let me say, it's not easy finding mead and I definitely wasn't prepared for the cost. But I did find it and cooked it down to get rid of the carbonation and as much alcohol as possible. 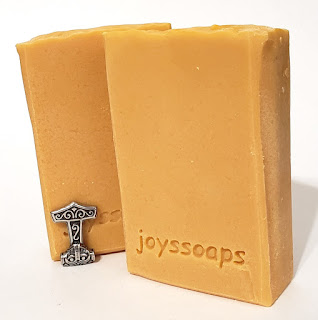 Because mead is made from honey I wanted the soap to have a honey color and I used the sea buckthorn oil to achieve that. The soap also has flax oil and beef tallow...the Vikings could (possibly, maybe) have used these to make soap...if they made soap.
The Viking Spiced Mead Soap is lightly scented with clove essential oil and also comes with a Hammer of Thor attached to the raffia on the bar. It was the symbol of the Viking god of thunder.
The last bar in this series is Viking Shield Maiden Soap. We tried to find information on what things may have been important to Viking women. Not an easy task. I know that nalbinding (it predates knitting and it's a form of making garments with wool and a needle made from bone or antlers) was a Viking thing. This is something I tried to do years ago and loved it. But it doesn't lend itself to soapmaking. Instead I went a more natural ingredients route. 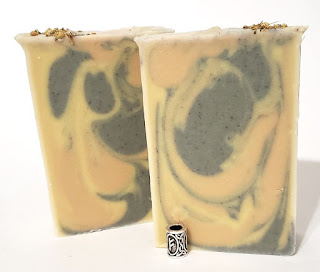 The Viking Shield Maiden soap has yarrow flower, elderflower and mullein teas instead of plain water. Goat's milk, beef tallow, flax seed oil, evening primrose oil, and rose absolute essential oil. I was aiming for a floral scent and when I read about the areas the Vikings inhabited there were a lot of flowers from the rose family, so I went for rose.
The colors I chose represent the seashore that may have been visited by Vikings. Light sand, blue seas and pink wildflowers. Each bar will come with a rune bead that can be worn in your hair, a guy's beard, used to make jewelry or whatever you want to do to show your inner Viking!
The Viking soap series will be available at Joy's Handcrafted Soaps in February!
at January 02, 2021 No comments: