Learned something new today but I'm not sure what...

I've been planning a line of coconut oil soap for a wee while now. Coconut oil soap is probably the most lathery soap I've used. It's also very moisturizing. I've made hot processed coconut oil soap, there are still a few bars in my shop, but I am trying to switch back to making cold process soap.

I prepared my base recipe that I'll be using (coconut oil, coconut milk, essential oil, lye, water) and ran the numbers through SoapCalc to get the proper amounts of water and lye.

I removed four ounces of coconut oil and halved it, two ounces would have alkanet root as a colorant, the two were left plain.

I made the lye solution with the lye and water.

When the lye solution and oil were in the 80-85 degree F, I blended it to emulsion, added the lavender essential oil then blended together to almost a medium trace. I split the batter in half and added the alkanet oil to one half and the plain oil to the other half and stirred them each well.

I decided to try an "in the pot swirl" and poured the lavender batter into four different spots into the plain batter, gave it a quick stir and poured it into the mold, giving it some swirls on the top.

I check the temp of my soaps frequently to watch for anything unusual... 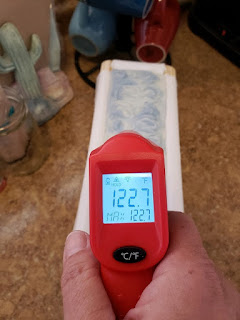 Definitely starting to heat up...it's been about 5 minutes since it was poured. As soon as I put the thermometer down and turned back to my soap I saw this... 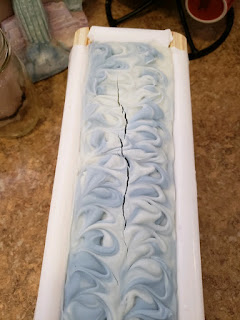 I stood there while watching it crack before my very eyes... 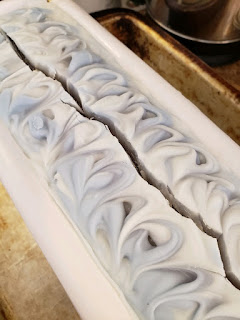 I watched as the gelling soap from the inside started pushing up through the crack. I was really worried about it causing a volcano and spewing right out of the mold so I placed the mold in a pan.

The temps reached 140F, honestly not extremely hot for a soap that's going through the gel phase, but what was an issue is that it did that all within 15-20 minutes. The top was already setting up (coconut oil makes a hard bar of soap) and when the inside started gelling it expanded and cracked the top.

I'm not exactly sure why all of this took place, maybe the lye reacting with the sugars in the coconut milk and heating up? Maybe I should skip the coconut milk in the other batches of my coconut oil soap?

I will have to do some research before I make more. I'm anxious to see what the soap will look like on the inside. Will the swirls still be there? Will the color change a bit...or drastically? Will I be able to cut it since coconut oil soap bars are hard and I have to let it cool and solidify from the gel phase? Will I end up with one big uncuttable hunk of soap? We'll see...
at May 07, 2020 No comments: