I absolutely love this soap. Milk soaps have pretty amazing qualities and have been used for centuries as a luxurious soap. Goats milk soap has a distinctive scent, its a lovely rustic scent that reminds you there's milk in the soap. It's quite lovely and I don't know if it's my imagination but I smell the oatmeal as well!

Milk soaps contain lactic acid which is a gentle exfoliant, it helps remove dead skin cells (who knew!) and goat's milk (and other milks) contains vitamin A which is helpful in moisturizing and maintaining healthy skin.

I love the orange bars of the Sweet Erica's Honey, Oats and Goat Soap but I wanted them to be more representative of the oatmeal color of the very first oatmeal soap I made. Its such a lovely, creamy color and the oatmeal has been blended to a powder so it's not too scratchy. I love seeing the speckles of oatmeal in the bars.

So I went old school with this batch and used the cold process method (it seems to be a bit nicer to do in the summer). I was very fortunate to have my son, Tyler, here to help I definitely needed the extra pair of hands!

Mixing lye into milk sometimes takes an extra step, it's not always necessary, it's more of an aesthetics thing. To keep the milk from turning a dark orange when adding the lye you can freeze the milk first. Freezing keeps it from overheating (and possibly scorching) when you start adding the lye. Then you add the lye to the milk ice cubes a tablespoon or so at a time and stir...a lot. The frozen milk starts to melt pretty quick and you just keep slowly adding the lye and stirring...a lot...until all the lye has been added and the milk cubes melted. Then you stir...a lot.

It's interesting to note that the lye and the fats in the goat's milk are already starting to saponify in tiny amounts during this process and tiny beads of soap start forming. The goal with all of the stirring is to make sure all of the lye has been dissolved. I always pour my lye solution through a strainer and the little tiny beads of forming soap made that a bit more difficult than usual but it eventually happened.

The soap smells as good as it looks!

When I mixed the lye/milk solution into the oils the lye solution was at 78 and the oils at 85. Nice cool temps for making milk soap. The soap did gel slightly and heat up to 118, surprisingly cool. But when I cut into them... 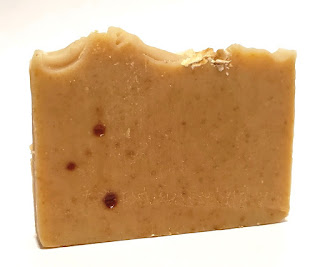 I had a slight moment of panic. I thought the soap had the...dun dun duuuunnnnn...dreaded orange spots (DOS, and yes...as silly as it sounds, it's a thing). I've heard of it but I've never had a soap with DOS...that I can remember. I did some searching, the pictures of DOS look nothing like this and the reasons behind DOS don't apply to my soaps. So if it's not dreaded orange spots, what is it?

Okay, so here's the story. When I warmed up the oils, honey and shea butter enough to melt the shea the temps were higher than my lye/goats milk solution. I was hoping to get the soap in the mold so I stuck the pot of warm oils in an ice water bath in the sink to bring the temperatures down. If you remember the name of this soap "Sweet Erica's Honey, Oats and Goat Soap...yup, that's honey. When I placed the pot of oils and honey in the ice water bath the honey solidified from the cold. I noticed it towards the end of the pour but forgot about it until I saw the spots. I think in my head (it's crazy in there sometimes) I thought the soap would superheat (milk soaps often do) and the honey would melt/blend with the soap batter as it heated.

So now you'll get the lovely properties of honey directly on your skin and since it's in soap it washes right off. Win-win, right? Well, we'll see. The soap will be perfectly safe to use and unless something crazy happens before it's finished curing, should just be soap with a few bits of honey here and there. It should be listed in my shop in mid-October.

Moral of the story? Wait until the oils and lye solution are emulsified before adding the honey.
at September 11, 2019