I love this soap, it smells great, has awesome beneficial oils and cocoa butter and it was fun to put together!
The essential oil used is litsea cubeba. I've never purchased it before and though I had read that it was citrus-ee I wasn't sure what to expect. When I opened it I was pleasantly surprised to find that it smelled like fruity cereal. I knew immediately it was going to be a soap that had something to do with cereal.
The scent took me back to my childhood Saturday mornings and watching cartoons before there were channels dedicated to them.
Once everything was planned I made four very small batches of soap in green, red, orange, and yellow (kind of) with natural colorants. 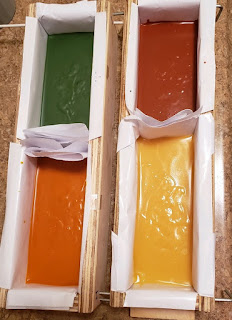 I then cut the small slabs of soap into tiny pieces and rolled them into pebble-shaped...pebbles. This is actually a thing, when soap is at a certain moldable consistency it can be used as soap dough...kind of like kids Play-Doh. It took a wee while and after three episodes of The Curse of Oak Island, that was done. I let them dry out a bit before starting the milk portion of the soap. 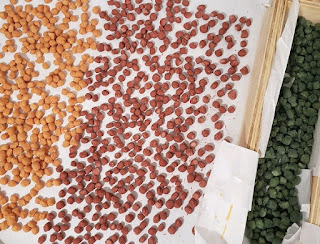 I have this thing where my brain doesn't understand spatial relationships or sizes, it's how I ended up with a 20-quart stainless steel bowl that I can't use and the worlds largest roll of biodegradable bubble wrap (that might be a slight exaggeration). I ended up making twice as much pebble soap than I needed. I poured the pebbles into my soap mold just to check, way too many. After some quick recalculations I continued on and hoped it would look how I had planned it once it was sliced. It did! 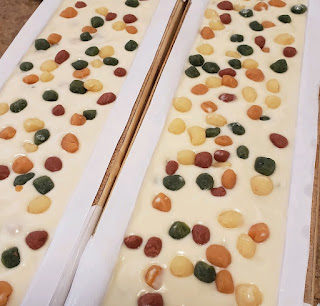 The Saturday Morning Cartoons Soap is in the shop at Joy's Handcrafted Soap! 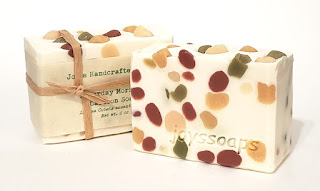